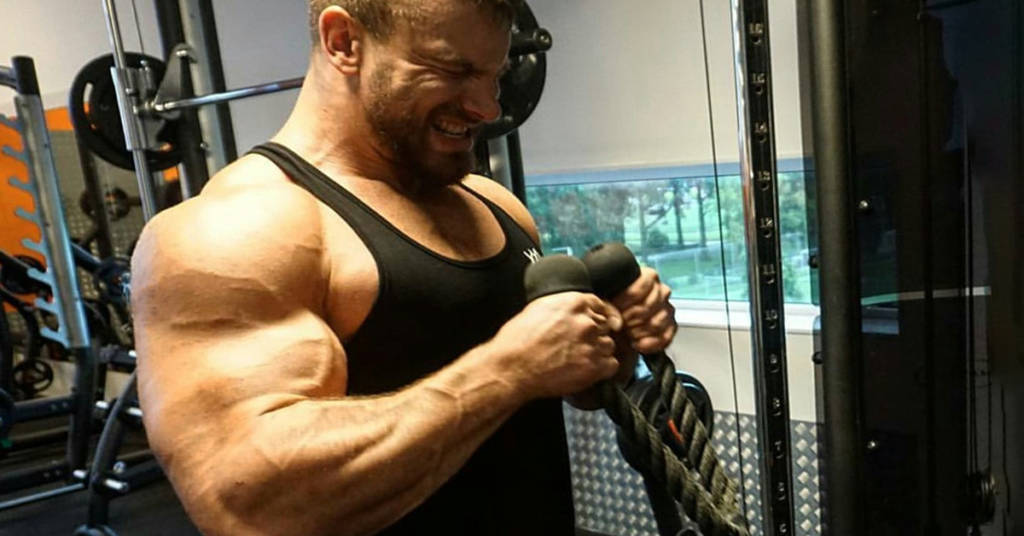 As indicated in the article on training the shoulders , we will walk through the muscle groups of the body together and discuss how to train them most efficiently.  This time we will deal with the arms, to be more precise the upper arms.

LAYOUT OF THE MUSCLES IN THE UPPER ARM

The upper arm consists of different muscle groups, each with its own function; In the names of the following muscle groups you will see the word ‘Brachi’ a lot; This word comes from the word Brachium, which refers to ‘arm’ and then emphasizes the part from shoulder to elbow.

The triceps is by far the largest muscle, making up about 55% of the total muscle volume. The biceps follow by about 25% and finally 20% for the rest. As we normally classify workouts, larger muscles need more training volume than smaller ones. Are you one of those people who does 5 exercises of 4 sets for chest, but only 1 or 2 exercises for triceps? Then I might kick your ass with the fact that the total muscle volume of the triceps can be quite a bit larger than that of the pectoralis.

as the smallest muscle, the brachialis would have the lowest priority if you want to grow large arms, but should certainly not be overlooked. A developed brachialis will push your biceps up and out, increasing the size of your arm. The Brachialis is a stronger flexor of the elbow than the biceps because it does not span the shoulder joint; this will deliver the full force across the elbow joint.

Why do we need to know this? This knowledge is important when we want to train muscles; to train a muscle optimally you want to use all the functions of that muscle and sometimes also disadvantage a muscle so that another muscle can work optimally.

TRAIN YOUR ARMS OPTIMALLY ACCORDING TO THE ANATOMY

Very short notice: The eccentric part of your exercises is IMPORTANT, perhaps more important than the concentric part. So perform your exercises neatly, DEFINITELY in the return movement. Those cheat reps where you curl your entire upper body so far back that it even hurts the eyes of your fellow curlers, while you let gravity do the way back are no longer an issue from now on.

In addition, it is also a common fact that it can be beneficial to train your muscles at different lengths in the range of motion (both in the short and in the length position). More on this later.

Finally, it is good to think of your elbow as a hinge; so try to work neatly, your wrist, elbow and shoulder neatly in one line. This way you put stress on your elbow in the way it is intended for and you don’t wreck your joint. For that reason I often work with 2 separate (possibly crossing) cables instead of 1 cable with a rope attached; you can perfectly align your joints in this way and you also know for sure that your stronger arm does not compensate for the other arm.

There are people and studies that claim that the arms are sufficiently trained when performing heavy compound exercises such as bench press and pullups. It is certainly true that the muscles in the upper arm put in a lot of work when performing these exercises, but with isolation work you will probably be able to create a greater training stimulus.

14 to 20 sets per week should be sufficient, divided into (at least) 2 workouts per week.

It is advisable to let the first exercise be a heavy one that can be easily overloaded. Think of a bench press or a dip, in a low rep range (with a lot of weight).

Grip width influences the activation of the triceps; the pectoral muscle can do less work with a narrower grip, so that the triceps will deliver more. In addition, a horizontal position seems to provide more triceps activation compared to a decline, incline or vertical position.

The pressdown will emphasize the lateral head a bit more, as the long head can work less effectively in this position. In an overhead exercise, the long head has more advantage, so that it can be trained optimally. Shoulder adduction is also one of the functions of the (long head) of the triceps; for this reason, the long head will appeal more when you squeeze your elbows into your sides. 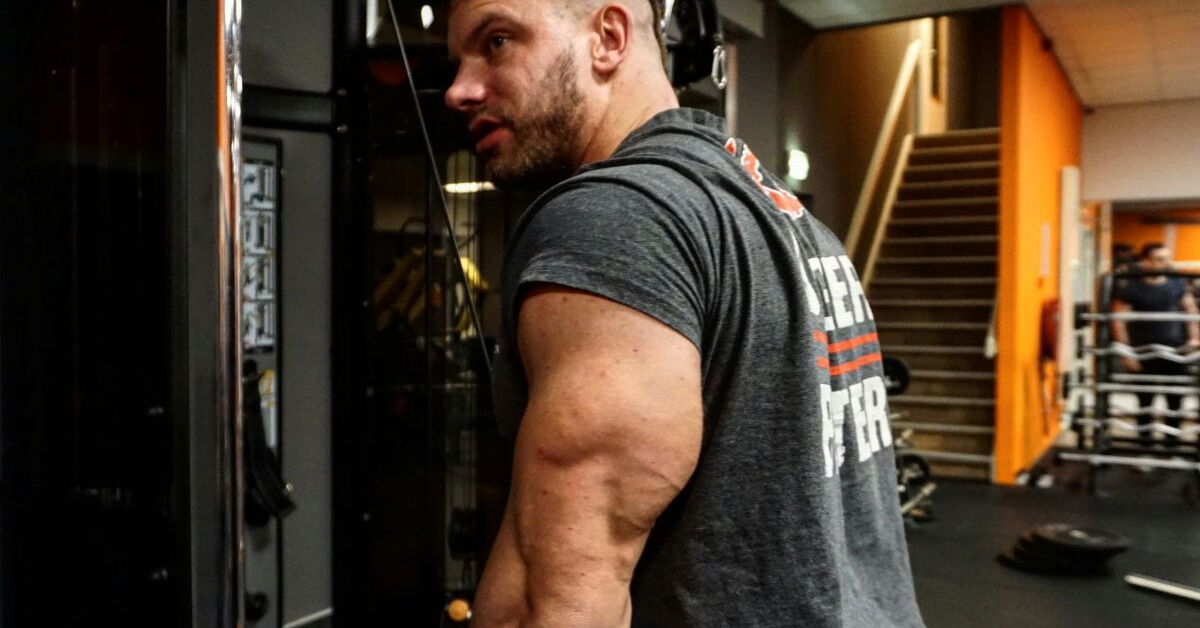 To train the biceps, you will have to return to a greater or lesser extent the functions we have just discussed. Since the biceps certainly also contain type 2 fibers, it is advisable to choose at least a curl exercise that can load you heavily, such as an EZ bar curl.

In addition, the choice of grip is very important; Since the biceps strongly contribute to supination, it is recommended that you include a rotational movement in your biceps training, where elbow flexion and supination occur simultaneously.

Finally, we can play with the different parts of the muscle’s range of motion; Combining a preacher curl (arm in front of the body) with an incline curl (arm behind the body) seems to provide more total activation.

Since the brachialis and the biceps have partly overlapping functions, we should try to disable the biceps as much as possible when we train the brachialis. An overhand grip seems to be a good choice for this, as with a reverse grip ez bar curl. Bonus: your forearms get a good blow right away.

Below you will find all the theory above in practice. If you have a separate arm day, you can use the schedule below. If you train your arms together with the larger muscle groups on other days, try to implement this knowledge. Remember that what gets attention grows. That applies to your studies, to your relationships, but certainly also to your poor. If your arms are (too) small, consider training your arms on your own day for a while, or moving them forward in your workouts. 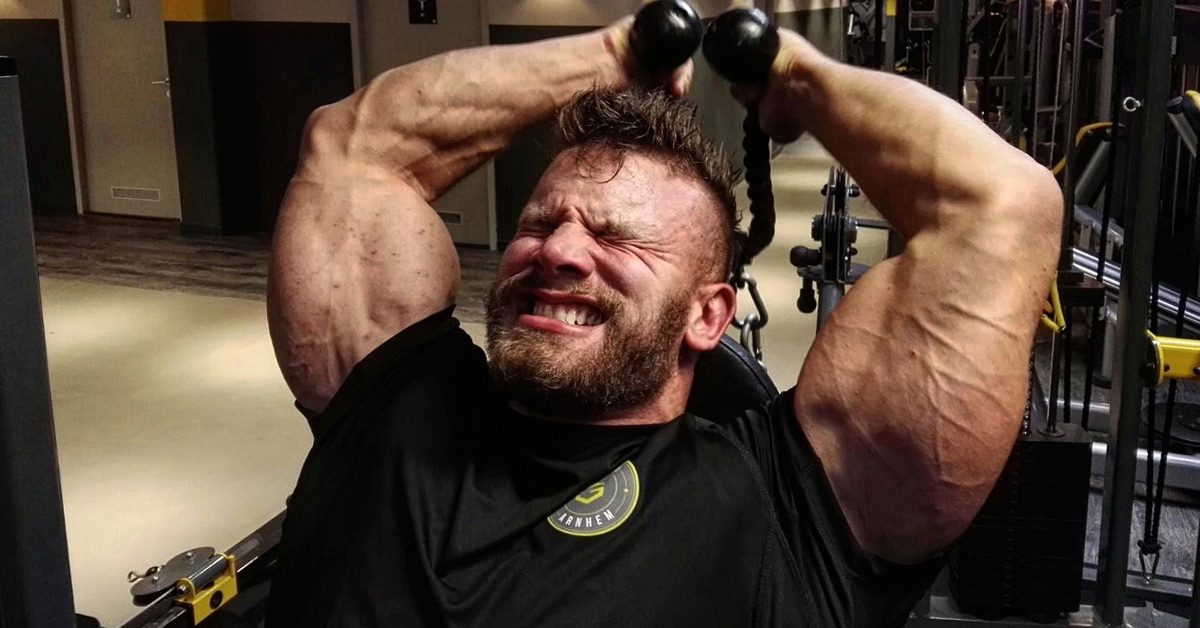